Home Periods 6 reasons why you may have an irregular period

Since imbalances in the period and irregular menstruation can be due to many factors, it is advisable to go to the specialist to rule out major problems and obtain a proper diagnosis. 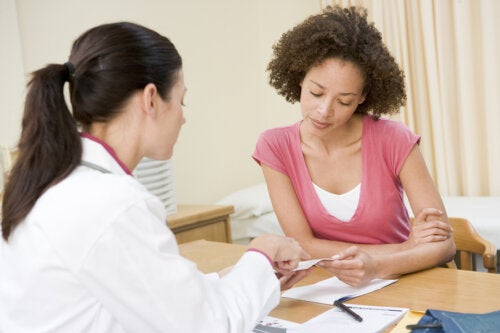 The menstrual period is a biological and hormonal process in women in which many aspects of their physical and mental health are involved. In general, it occurs every 28 days, with a duration between 3 and 6 days, depending on the hormonal activity in the body of each one. However, some women may have an irregular menstruation.

Although it is not necessary to be alarmed, it is essential to pay attention to it to avoid the development of complications. As we know that many do not know why these alterations can occur, this time we have compiled 6 possible causes.

Possible causes of an irregular menstruation

During the cycle, a series of changes occur that directly participate in sexual aspects and fertility. These even manifest themselves in different ways at each stage. And it is that the production of hormones varies considerably from puberty to menopause.

However, it is essential to know how to differentiate when some type of irregularity occurs, since this could indicate a health problem or hormonal disorder. Thus, having a menstruation before or after the usual date, can be key to detect other abnormalities.

Disorders in the activity of the thyroid gland are the main triggers of irregular menstruation. And it is that this organ secretes some important hormones.

Therefore, according to various studies, its imbalance is linked to a large part of cases of amenorrhea or abnormal periods.

Some consider it a “master gland” because it functions as a controller of the endocrine system, metabolism and sexual activity.

2. Abandonment of oral contraceptive use

The contraceptive oral is designed for birth control. Thus, during their intake, they prevent the woman from becoming pregnant. These keep estrogen levels high, which is essential to prevent fertilization from occurring.

Then, after 21 days of consumption, there is a week of “recess” in which menstruation occurs without any type of irregularity.

The problem is that many times, when they stop ingesting, there are irregularities or absence of menstruation given the hormonal changes that this implies.

It is quite common for women who stop taking their birth control pills after some time of use have a period absent for up to three months.

Various studies show that high intensity sports training can influence changes in the adrenal, thyroid and pituitary glands. This usually manifests you with alterations in menstruation.

For example, women who compete in marathons or sports competitions often miss their period for a month or two. This is due to the alterations that occur in its hormonal activity. In fact, one 81% of women have amenorrhea bodybuilders at some point in their lives.

Hormonal imbalances, such as those caused by Polycystic Ovarian Syndrome (PCOS), are a common cause of alterations in the menstrual cycle.

This condition alters the levels of sex hormones, including estrogen, progesterone, and testosterone. As a consequence, menstrual period cycles change and, in turn, other symptoms occur such as:

Another hormonal problem involved is the so-called premature menopause, that is, one that occurs before the age of 40. In this case, the irregular periods are accompanied by:

An article published in the research explains the relationship between irregular menstruation and stress. The reproductive system is controlled by both the neuronal and endocrine systems.

The hypothalamus is the neuroendocrine gland responsible for promoting the function of the ovaries. Thus, any alteration in it, such as that caused by stress, can affect the menstrual cycle. Thus, it is possible that these changes lead to variations in the cycle or make it more painful.

The nutritional deficiencies tend to alter the functioning of the thyroid gland and adrenal. A diet low in antioxidants, vitamins, minerals, and probiotics can increase cortisol levels. This leads to disorders like hypothyroidism and adrenal fatigue.

A high level of cortisol not only increases stress, but also inhibits the activity of many important hormones, such as those responsible for sexual activity.

Therefore, at the first sign of an irregular menstruation, it is essential to ensure an abundant intake of foods of high nutritional quality.

What to do if you have an irregular menstruation?

It is essential to know the factors associated with irregular menstruation to proceed to give them a timely treatment.

In this sense, it is convenient to consult the gynecologist to accurately check the hormonal activity and the factors influencing this problem.

6 Menstrual Cycle Irregularity You Should Not Ignore

9 Things Menstruation Can Tell You About Your Health

Why can my period last longer than normal?

Cysts in the breasts: what do they mean?