Are you going through menopause? In that case, you probably want to know what you can do to reduce your symptoms. We’ll tell you if magnesium supplements can help you. 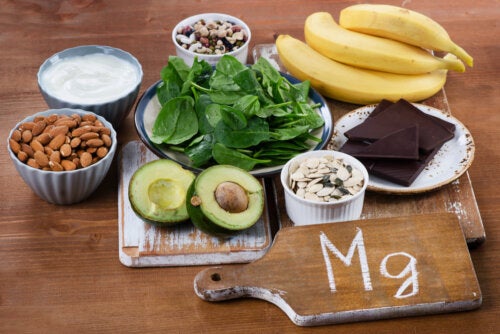 Some authors have proposed that the inclusion of a magnesium supplement could be effective in reducing the symptoms of menopause. If this is true, it would represent a dietary strategy that could be added to the existing ones with the aim of increasing the quality of life of women at this stage.

Menopause is a process that everyone goes through after a certain age, after which they stop producing eggs and, therefore, lose their reproductive capacity. This condition involves a series of hormonal changes that can negatively influence mood and lifestyle. Therefore, it is essential to know how to relieve it.

Menopause is a natural process that causes a decrease in the production of sex hormones. In this way, ovulation and the ability to generate offspring are blocked. The alteration of hormonal cycles leads to a reduction in metabolism, so it is common for women to start gaining weight at this stage.

According to research published in the Australian Family Physician magazine, women tend to increase their percentage of body fat after exceeding the fertile period. For this reason, monitoring your diet becomes essential to avoid being overweight.

In addition, the onset of menopause brings with its other side effects, such as sweating, hot flashes and even dizziness. Even, some studies claim that you can produce a state of chronic fatigue and fatigue.

Magnesium and the symptoms of menopause

The experts say that magnesium deficiency could aggravate the symptoms of menopause, increasing them for the worse. For this reason, it has been postulated the possibility that supplementation with this mineral is effective in reducing the symptoms of the process, thus improving the quality of life of women.

However, there is not abundant evidence. More trials are needed to experiment on the effects of magnesium supplementation in menopausal women. In addition, it is necessary to also establish an optimal dose and schedule of administration, since the literature does not propose anything in this regard.

Magnesium, according to what is known today, could become an effective supplement to increase the quality of life of women with menopause, but it is too early to recommend it for that purpose.

However, it can be used if its purpose is to reduce the risk of developing some cardiovascular problems, such as atherosclerosis. A study published in the journal Nutrition Journal ensures that this mineral decrease calcification of arteries in genetically predisposed individuals.

Side effects of magnesium consumption

Among the side effects of consuming magnesium in high amounts, variation in mood can be found, according to a study published in 2017. Although it is not a very serious or intense problem.

On the other hand, nausea and vomiting can occur when magnesium is ingested in excess. It is also possible to experience bouts of constipation.

As a general rule, we can emphasize that it is a fairly safe supplement. It is used for the treatment of anxiety, stress and insomnia, although it is also consumed by athletes in order to avoid muscle cramps. However, it should be avoided in large quantities if you suffer from kidney failure.

In nature we can find several foods that contain significant amounts of magnesium. Among them the following stand out:

Despite the lack of evidence in this regard, magnesium could constitute a mineral capable of alleviating the symptoms of menopause in women. Anyway, and in the absence of more tests to confirm it, it is not recommended yet to include its supplements in the diet for this purpose.

To treat menopause there are other dietary and even pharmacological strategies that can be put into practice. In addition, it is advisable to exercise regularly, which has been proven to reduce even cancer risks in women over 40 years of age.

However, if you want to increase your intake of the mineral to benefit from its properties, just emphasize the consumption of vegetables and whole grains. This way you will get a higher dose that can prevent the increase of the symptoms of menopause.

Why do menstrual cramps occur?

Cysts in the breasts: what do they mean?

Why does my twin go up?

Premature Menopause: Does It Really Exist? How to recognize it?

Why is more gas generated during menstruation?